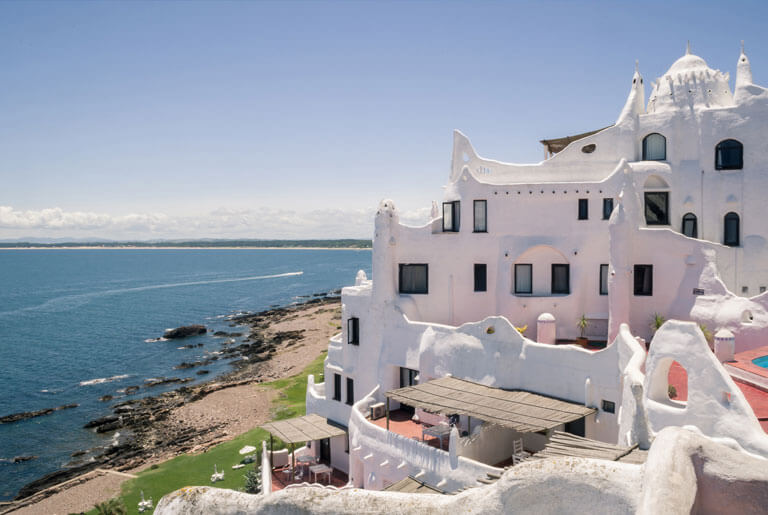 Hidden (some would say stuck) between the two superstars of Latin America, namely Brazil and Argentina, the humble Uruguay is well known for its discretion, not to say its mystery. With a surface area three times smaller than that of France, this country is, however, the birthplace of three of the greatest French poets of the early 20th century, Lautréamont, Jules Laforgue and Jules Supervielle. An invitation to poetry that is hard to ignore.

In the 1970s, Punta Del Este, located 134 km from the capital Montevideo, became the favorite winter destination of the local intelligentsia, as well as the rich Argentine neighbors and adventure-souled Americans. They have been joined since then by many international celebrities: Charlotte Gainsbourg, Natalia Vodianova, Zinedine Zidane, Naomi Campbell, Uma Thurman or Pierre Casiraghi. Although it kept a certain charm, La Punta, as nicknamed by its regulars, is now a shadow of its former self and its legendary gentle way of life turned into fury. Located further down the coast, at 40 km, José Ignacio is now the place to go: a small preserved village with a spectacular natural beauty flooded with an "endless and meticulous light". 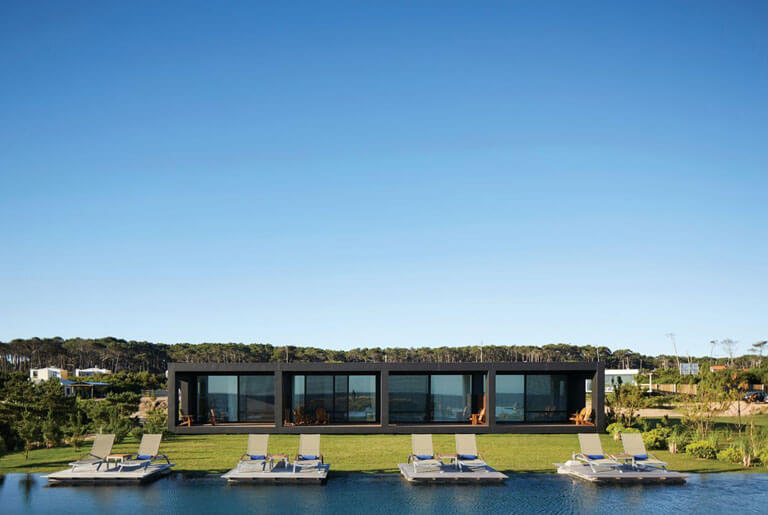 Best time to go there

The high season is from December to February. We recommend the months of March and April or October and November to visit José Ignacio without the need for booking all the restaurants months in advance.

Our favorite place at José Ignacio. Here, you don't stay at the hotel... You stay at a friend's place, Francis Mallmann, one of the best chefs of the country, renowned for his barbecue cooking. Located in a very beautiful century-old house, the hotel offers 5 rooms with a perfect decoration and atmosphere. The pool parties are the events that no visitor should miss.

The owners of Estancia Vik own several attractive places. At Bahia Vik, you can have your own bungalow surrounded by dunes, on the wonderful beach of Mansa Beach. Special Mention for the pool.

Designed by the Uruguayan architect of the Opera Bastille in Paris, Carlos Ott, the Playa Vik hotel is a contemporary paradise for all the lovers of refined and modern architecture. Furniture and facilities designed by the artists James Turell, Zaha Hadid or Anselm Kieffer co-exist with raw and local materials. The astonishing raised infinity pool is the perfect place to enjoy the wonderful sunset. 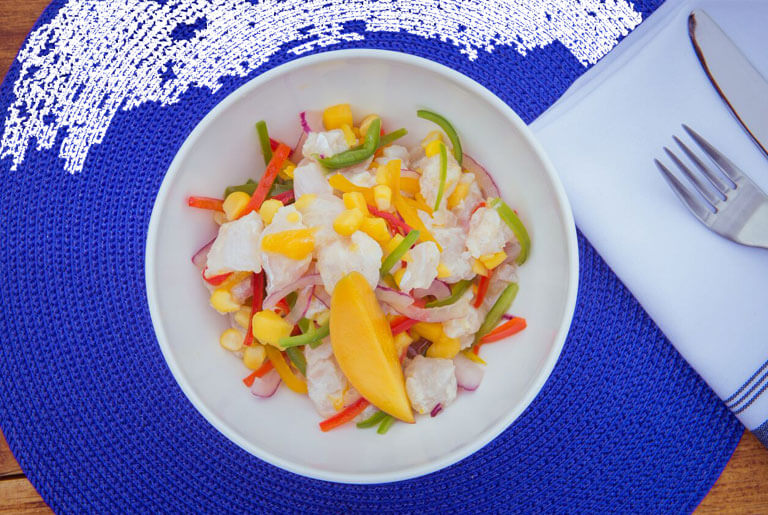 José Ignacio is known for its gastronomy scene. Depending on the season, remember to book. Remember! Dinner is served very late in Uruguay.

La Huella owes its magical atmosphere to the perfect combination of a relaxed style, a kind of beach hut fully made of driftwood, and the meticulousness of its wood fired meals: crispy octopus, crunchy shrimps, delicious bass. Inescapable.

A perfect spot on the waterfront, the Bahia Vik hotel restaurant is the ideal place for a lunch or dinner with an astonishing view and refreshing meal. Excellent ceviche. Trendy atmosphere.

Located on a private and secrete island, La Caracola can only be discovered once you have made your reservation, received the address, and took a private boat to pick you up to the edge of the world. A unique and luxurious experience, with a glass of sangria in hand.

A must in José Ignacio for a candle-lit dinner on the beach under the stars and among a crowd of classy people. Around a big bonfire, guests meet together and share opinions on the quality of the Uruguayan traditional cuisine. 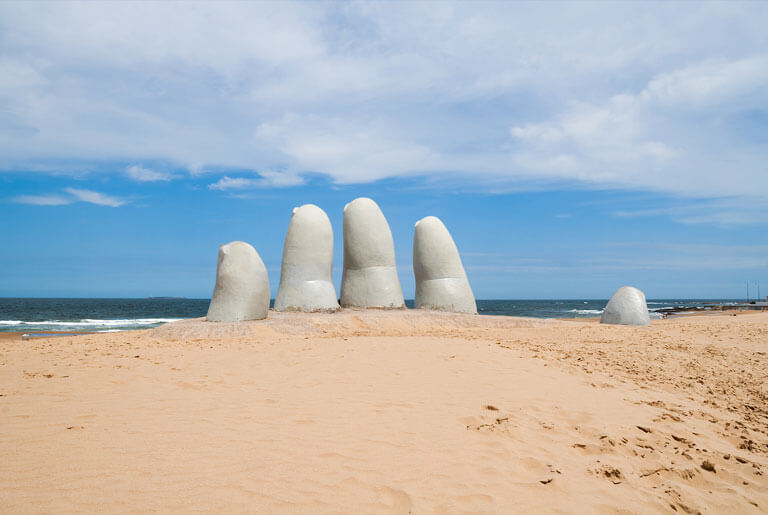 Created by the Chilean artist Mario Irrarazabal in 1982, this outdoors sculpture, representing the man coming to life, is one of the icons of Punta Del Este.

Second iconic work of Punta del Este, Casa Pueblo is the slightly crazy bet of the Uruguayan painter and sculptor Carlos Páez Vilaró. It took more than 36 years for the artist to build this living sculpture facing the sea and in which he is still living.

A beautiful collection of Latin-American contemporary artists and some paintings and sculptures of Dalì, Magritte and Calder that are well worth a look. 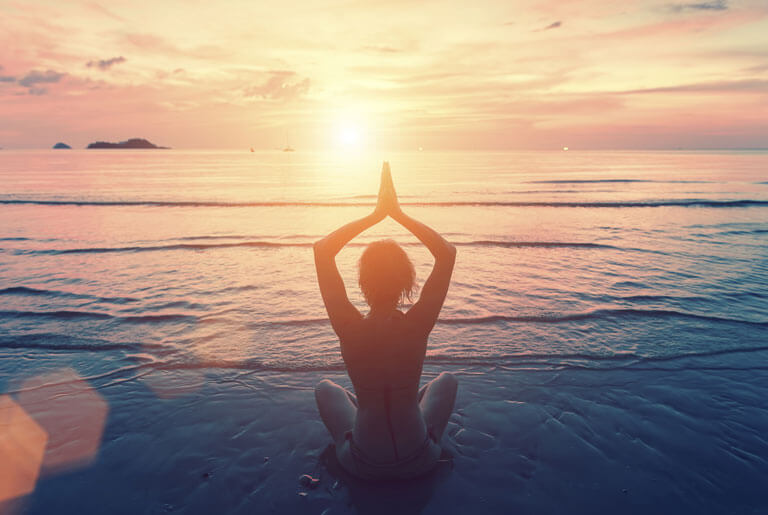 - Try the national sport, the Fulbito, a mini soccer played on the beach.

- Yoga: the yoga studio "The Shack Yoga" is amazing. And José Ignacio, the ideal place if you have never experienced it before.

- Going to the beach: 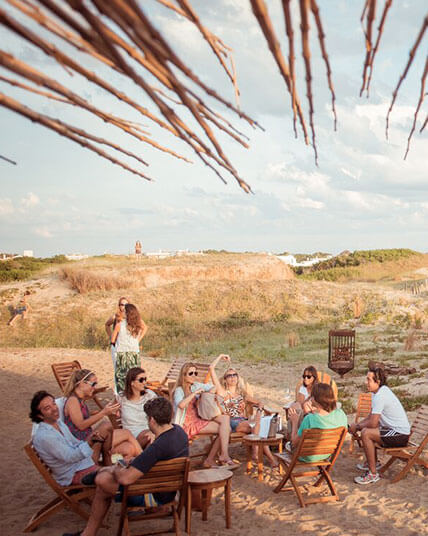 The Mate: the beverage that Uruguayans enjoy from morning till night. This is a herbal infusion, yerba mate, recognized for its numerous health-beneficial properties.

The Clericó: a white sangria or the Viognier Juanico, a local white wine. 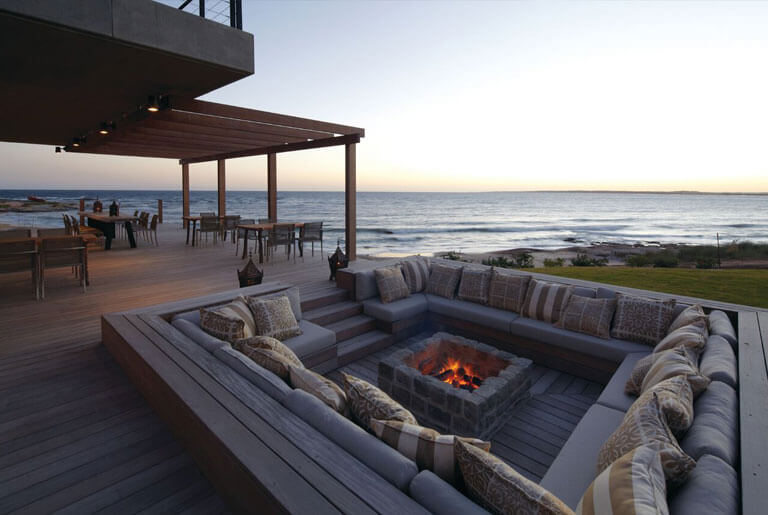 José Ignacio (2009), directed by Ricardo Preve. A love story between a lonely writer and a female teacher of local surf.

Astor Piazzola – Suite Punta Del Este
This work is a tribute of the great Argentinean tango compositor in Punta Del Este where the artist had been living.